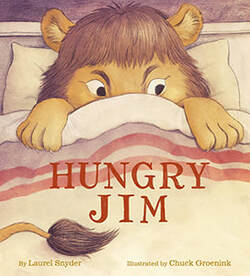 HUNGRY JIM
by Laurel Snyder,
2019, Chronicle
"Groenink's illustrations have a similarly psycho-Sendakian cast, centering on a magnificently leonine protagonist with lightly anthropomorphized features who bounds down a street of antique, neatly drawn shops and into a gloomy forest" - Kirkus 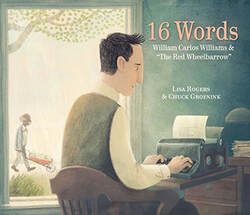 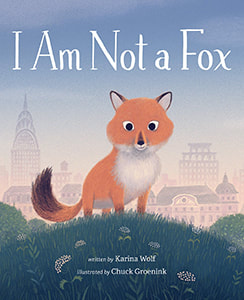 I Am Not a Fox
by Karina Wolf,
2018 , Putnam
"Groenink’s digital illustrations are softly textured and showcase a very appealing title character." - Kirkus
"Wolf (The Insomniacs)   and Groenink (William’s Winter Nap) take on the big issue of identity within the context of a gentle urban world, and readers will sense that the thoughtful, earnest protagonist’s question—“Who am I?”—will lead to a wonderful answer: someone who is loved." - Publisher's Weekly

William's Winter Nap
by Linda Ashman
2017, Disney Hyperion
A Junior Library Guild Selection
“Beautifully paced, rhymed, and cadenced . . . [The] mixed-media artwork creates a strong sense of the setting and the appealing characters.”—★ Starred review, Booklist
“Ashman’s meticulously crafted rhymes are a delight to read . . . And [Groenink’s] forest creatures are as adorable as it gets.” —★ Starred review,   Publishers Weekly 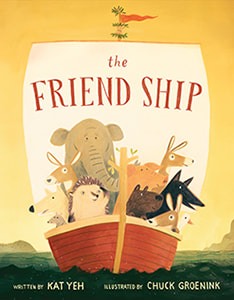 The Friend Ship
by Kat Yeh
2016, Disney Hyperion
' Groenink’s animals radiate sweetness, but it’s the aura of his vignettes and spreads that draws the eye. Warm sunsets glow like polished wood, and starlight gleams from skies of Prussian blue. The depth and quality of the light gives the spreads a hint of the sacred—just right for this hymn to friendship.' - Publisher's Weekly 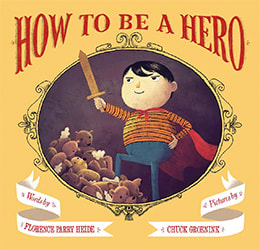 How to be a Hero
by Florence Parry Heide
2016, Chronicle Books
"Heide’s third-person-very-limited narration follows Gideon’s unmindful perspective while the illustrations show far more. Groenink uses pencil and Photoshop to create warm, low-saturation scenes with an old-fashioned lilt, using color judiciously in fantasy scenes, such as varying purples during a dragon-killing, or on Gideon’s nose, which is sometimes peach-skinned like the rest of his face but sometimes dark red, plum, or purple. Classical references (Propp & Bettelheim Quality Butchers) add a layered spark." —★ Starred review, Kirkus
"Working in the warm, rich hues of once upon a time, Groenink (Rufus the Writer) nimbly shifts between suburban ordinary and fairy tale extraordinary while vividly portraying Gideon as a self-possessed kid"   - Publisher's Weekly
"Worst children's book ever. It makes NO sense. It has no redeeming value or story whatsoever" - Amazon review 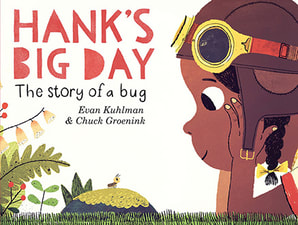 Hank's Big Day: The story of a bug,
by  Evan Kuhlman.
2016, Schwartz & Wade
A  Junior Library Guild   Selection
"An eye-catching picture book with an intrepid little hero."
( Booklist, Starred)
"The energy of art and text move seamlessly down to nighttime—and a young reader's nap or bedtime. Excellent layout, text, and illustrations make for a thoroughly satisfying story."  ( Kirkus Reviews, Starred)
​"...lovely and inviting...Big, it seems, doesn’t need to refer to revelations, drama, or physical size; it can speak instead to the significance of having a friend who is deeply simpatico."  (Publisher's Weekly,    Starred) 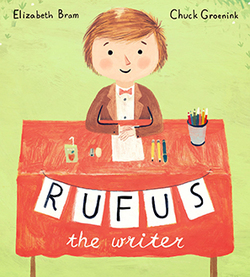 Rufus the Writer, by  Elizabeth Bram.
2015, Schwartz & Wade
" Groenink chooses a lush and delicious sun-drenched palette for his upbeat and lively full-bleed gouache,
acrylic, and pencil artwork.
A charming, celebratory ode to the writing life and those who follow their artistic inclinations wherever they
lead."
(School library journal, June 2015) 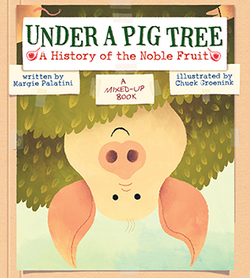 Under a Pig Tree: A History of the Noble Fruit, by  Margie Palatini.
2015, Abrams
"Groenink’s (Santa Clauses) witty, accomplished artwork vaults the book into the memorable category. With easy grace, he parodies Greek vases, Chinese porcelain, and medieval Books of Hours, while adding plenty of pig sass of his own. It’s a prime choice for foodie families."
(Publishers Weekly, February 2015) 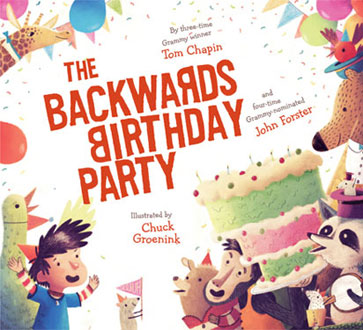 ''The mixed-media illustrations hum with energy, movement, and color, capturing the spirit of this anything-goes celebration."
(Publishers Weekly, December 2014)

You can order a copy at Powell's Bookstore. 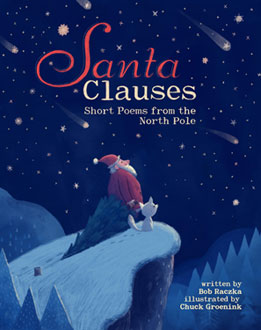 Santa Clauses: Short Poems from the North Pole, by Bob Raczka.
2014. Carolrhoda Books.
From the starred Kirkus Review:
﻿"An oversize format gives plenty of room for intriguing illustrations with a muted palette and an Old World flavor. The volume’s thoughtful design uses a typewriter font to emphasize the personal nature of Santa’s haiku... Anyone interested in haiku or poetry for children will find this collection a rare treat." ﻿ 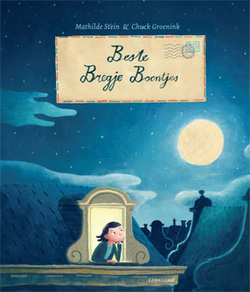 Dear Daisy Dunnington, by Mathilde Stein.
2011. Lemniscaat.
Available in English and Dutch (as Beste Bregje Boentjes).
From the Kirkus Review:
"Each of the letters is fulsomely illustrated with rich detail and rubbery figures; Mel Glitzstein’s invitation for Daisy to star in Wrath of the Mummy waggishly depicts an Indiana Jones–type escape with a Peter Jackson/Martin Scorsese–ish director calling the shots."